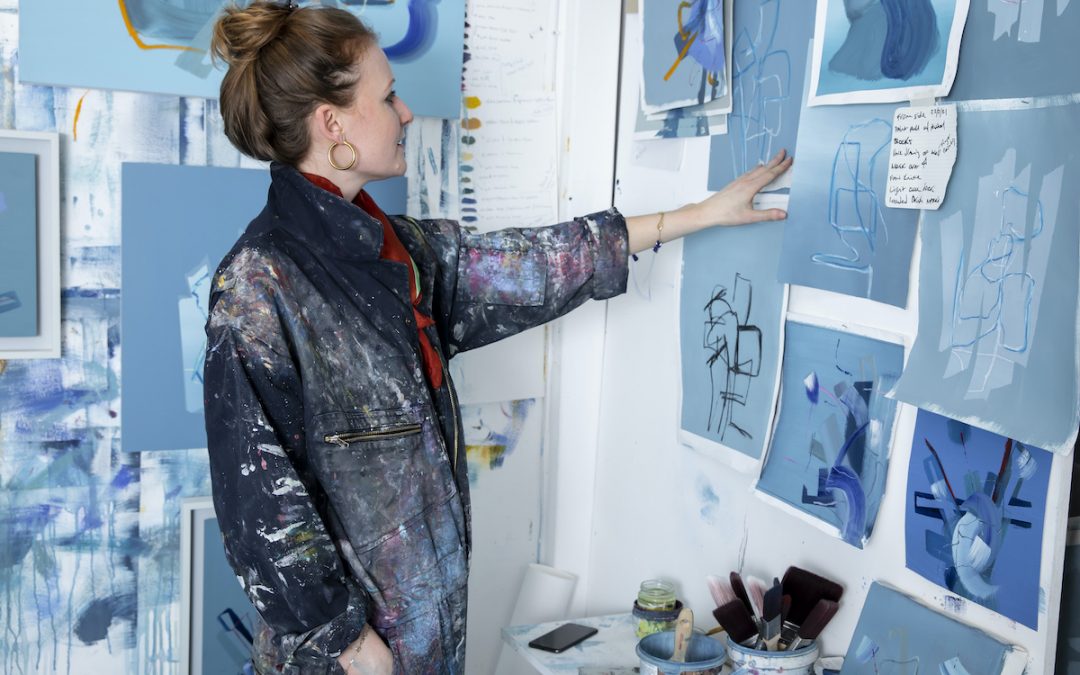 Blank Canvas Paralysis is referenced as the inability to start something because of self-doubt- I can relate! A while back a blog interviewer asked me ‘What’s the most difficult part of starting a painting?’ Me, ‘The white square I know I have to fill and make something successful come from it’- no pressure!

For years the thing I disliked most in my studio was the white canvas, white panel board or white paper on my studio wall. I used to feel a dreaded anxiety because I knew I had to fill these white gaps with something of interest that says this is a painting of my making. The fear it created in my head was frustrating & exhausting- how do I begin this painting, can I do this, seriously have I done this before?!

Through studio shares and meeting countless artists over the years, I have learned that ‘fear of the blank canvas’ is a common angst amongst artists and is comparable to writer’s block. Here’s how Van Gogh battled with blank canvas paralysis and its spell:

You don’t know how paralyzing that is, that stare of a blank canvas, which says to the painter, ‘You can’t do a thing’. […] but the blank canvas is afraid of the real, passionate painter who dares and who has broken the spell of `you can’t’ once and for all.

I also (eventually) recognised how to break this spell by painting my signature on its glaring white face in big majestic swoops and swirls in whatever colour I had on my palette (preferably the brightest). Thinking back now it sounds funny but this practice held dominance over the blank square resulting in a power shift because the blank space ( that had to be filled) was now disrupted. There was a new element that interrupted the white space and that interruption, as egotistical as it sounds was my signature!

I’ve now got to the point where I can recognise what can jolt the ‘white canvas fear’ back into swing, here’s some examples:

How do I start this painting, how do I do this again?

These questions arise when I’m starting a new series of paintings or when I’ve had a break from painting. You see, I am most comfortable when making a couple of paintings at one time. I’m at ease with them, I know where they’ve come from and have an idea of where I want to go with them- it’s an established relationship! I like to admire them on my studio wall and imagine them visually chatting with each other. There’s a relaxed atmosphere as creative flow rhythmically works its way through each one.

The issue is though, is that there has to be a starting point for this scenario to come into play. I can’t reach that mid development point where all the paintings are having a natter on my studio wall unless I tackle the first canvas and that first canvas is blank- yikes! So to ease this painting pain I am constantly making preparatory paint studies. These are small unconscious fragmented pieces of paper that I view as mini starter paintings that can feed into that first canvas (after it’s been autographed!) Here are some recent preparatory paintings

Sometimes too many options can be debilitating. American psychologist Barry Schwartz takes an in-depth look at this in his book ‘The Paradox of Choice’ which is a social critique on our obsession with choice and how an abundance of this can actually result in dissatisfaction.

When I’m in full ‘painting mode’ I have a lot of ideas spinning around my head. These generally end up on above-mentioned painting studies but I need to produce them before I forget plus, they need order. I can spend a lot of time trying to mentally put these ideas in order before actually translating them onto paint studies which is time-wasting and irritates me because I like to be productive when I’m in my studio. So to remind myself to stop messing about I printed off a reminder in the largest font Microsoft word would allow ‘JUST FUCKING PAINT’ which nicely segways into my next point….

For me, planning a painting means procrastinating. Previously, the idea of planning the painting (that would fill the white void) would equal conquering the blank canvas because I would know what I wanted to do. This of course reverts right back to my first point about the worry of starting a painting. Gradually, I’ve learned to not labour the making of a painting but instead to just dive into it and trust myself. I don’t use photographs nor do I preconceive what I want to do in photoshop. The only tool for guidance I have are my visual diaries that I have used to record my work since I began art school. They’re a back catalogue of all the sketches, annotations, paint marks and thoughts I’ve had so far in my career as an artist. I give them pride of place in my studio with their own designated shelf- if I get lost in a painting, I know they’re there to direct me.

Fear and it’s good friend failure, what a time we’ve had together! We all experience F&F but embracing these buddies is something to pay attention to. F&F were the main contributors to the rise of my blank canvas syndrome. Gladly or even delightedly, I am at a point where I can accept F&F in my work and how I want it to progress. I can even recognise how fear and failure have actually helped me, pushed me forward to make career decisions I would not have been able to make unless I had ‘felt the fear’ so to speak.

Thanks for reading, hope it gives more insight into my painting practice, Aisling